The word “antithesis” comes from the Greek word meaning “setting opposite,” which is an idea that has been used in various forms. Let’s look at those various forms in more antithesis examples.

How do we use antithesis today?

The purpose of antithetical language is not just mentioning the existence of opposing ideas, but rather emphasizing the stark differences between them. The often lyrical and rhythmic nature of this device helps accentuate the parallel grammatical structure.

We use this device in that pure form today (see the examples above) in everyday turns of phrase. But there are more in-depth ways (in actions and story in general) that fit the antithesis definition.

In addition, characters in literary or scripted works, much like people, can be antitheses to each other in and of themselves. In fact, this is often how great villains are created.

Protagonists can be an “antihero,” or the villain of a story can be portrayed separately as a parallel to the protagonist; therefore, the protagonist and antagonist highlight each other’s strengths and weaknesses, and evil and benevolent qualities. Some classic examples of this pseudo-mirrored antagonist concept are:

As you can see, the antithesis is typically the ultimate antagonist, even if the character they are meant to parallel isn’t the protagonist, as is the case in the Harry Potter series.

Both a strong example of antithesis and nuanced portrayal of complicated character relationships, the Harry Potter series showcases a number of moral ambiguities as they pertain to Dumbledore and Voldemort. 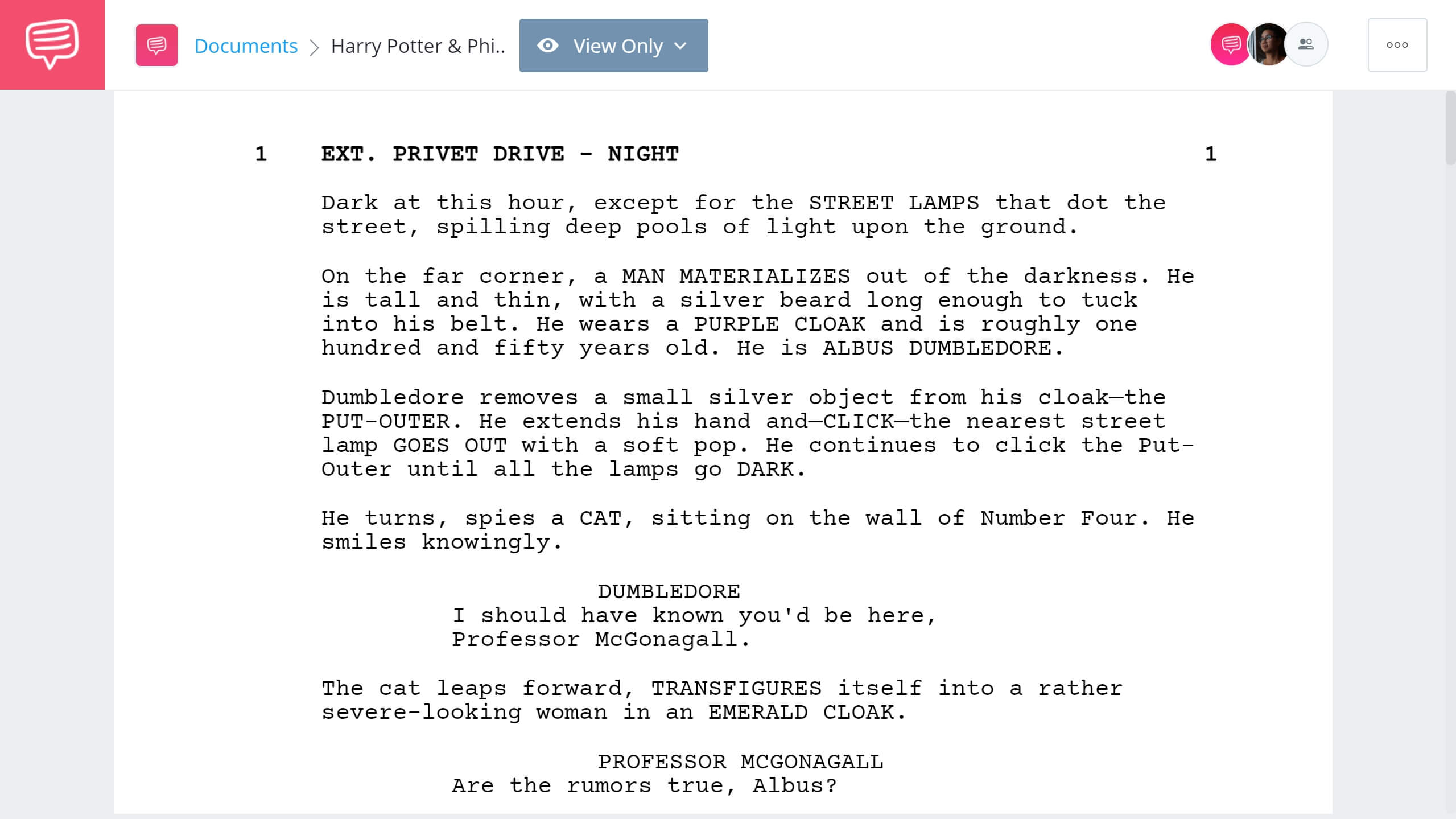 For instance, in the Sorcerer’s Stone, we are introduced to how Voldemort and Dumbledore move through the world. Hagrid tells Harry early on about Voldemort’s rise to power: he was a wizard “who went as bad as you can go [. ] anyone who stood up to him ended up dead.” Hagrid frames Voldemort as a powerful wizard, capable of massive destruction. 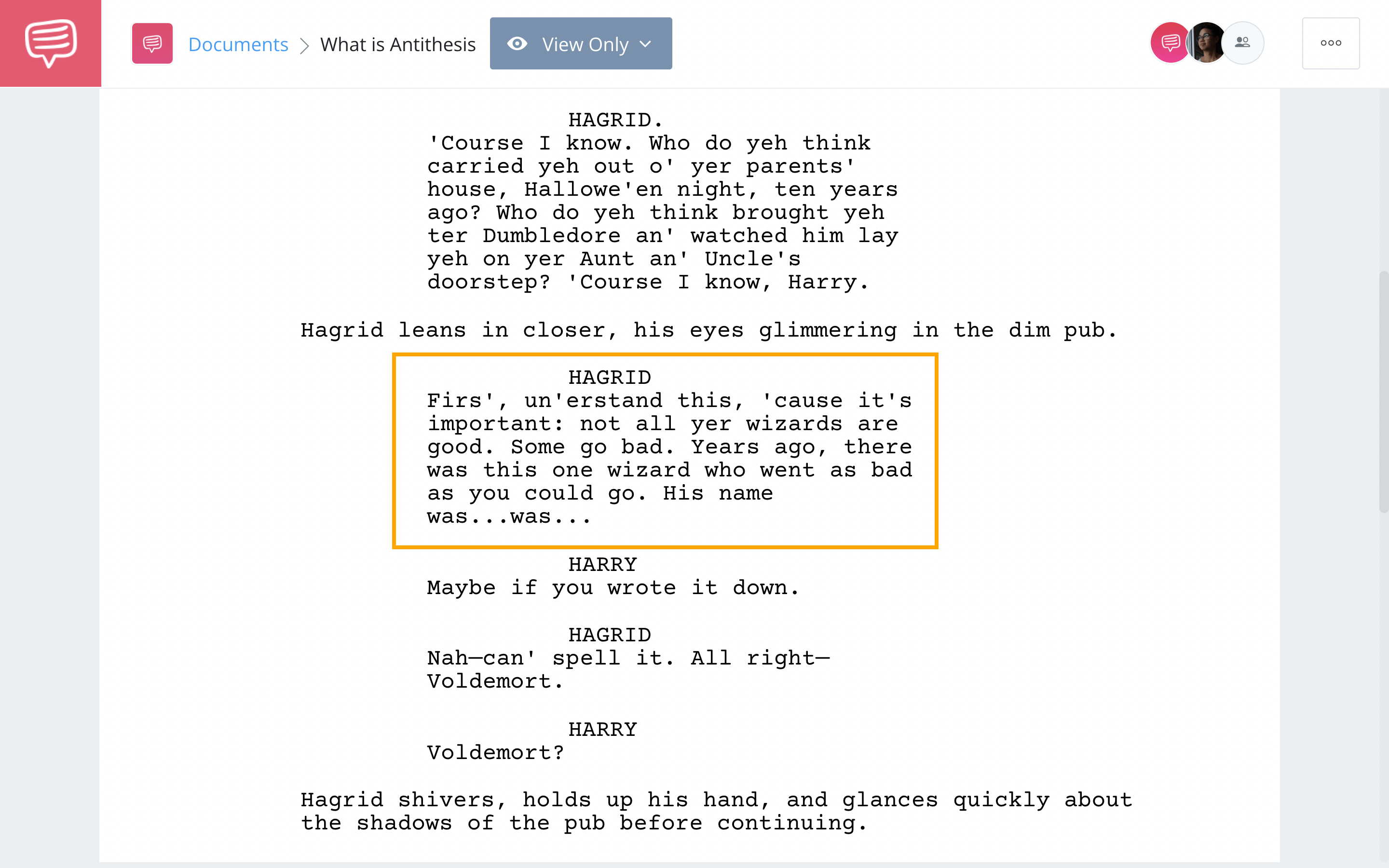 Alternatively, towards the end of the first film Dumbledore explains his tactics in his work with Nicolas Flamel on the Sorcerer’s Stone. “Only a person who wanted to find the stone—find it, but not use it—would be able to get it.” Dumbledore respects power and the laws of magic, and his actions reflect that. 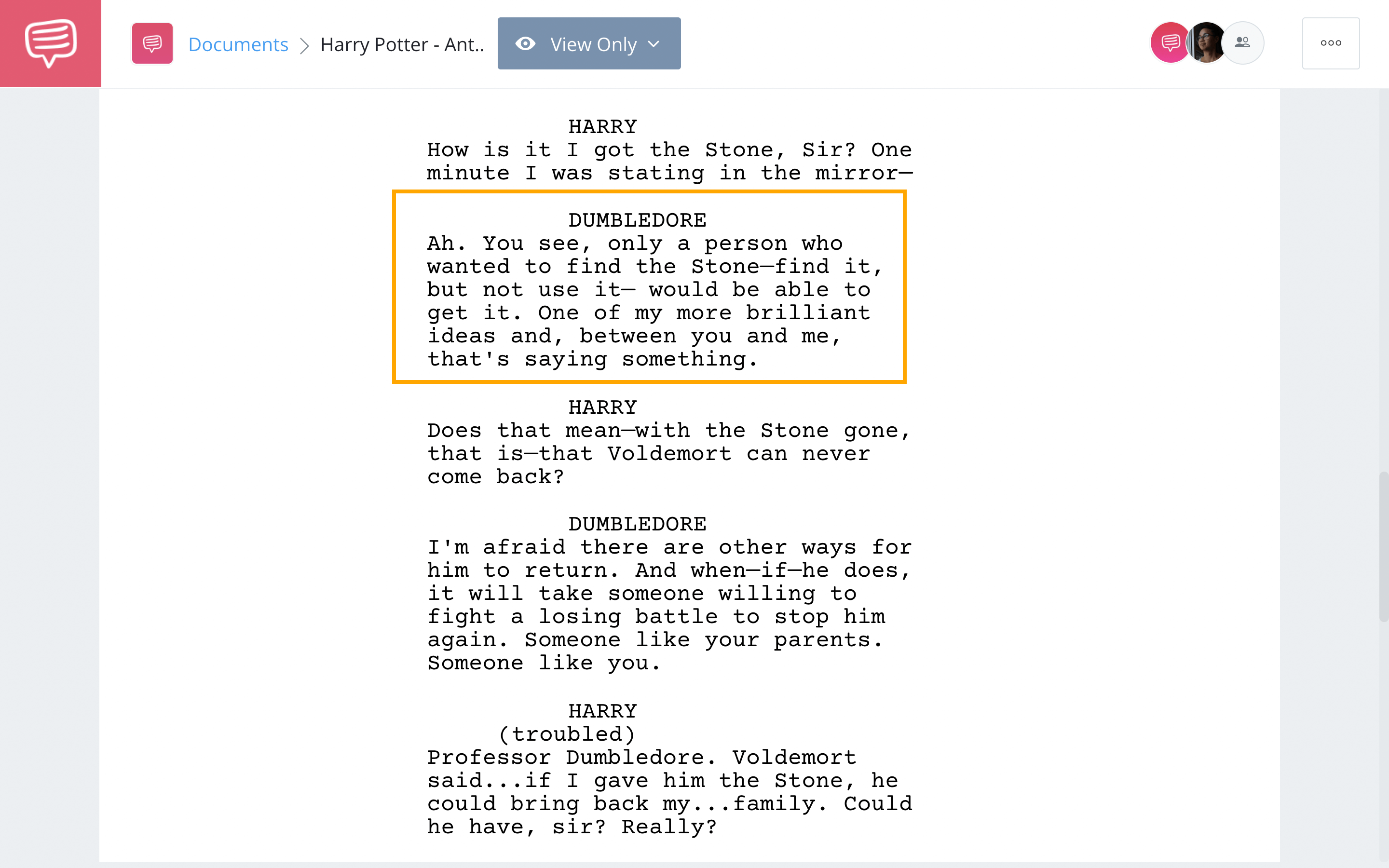 Further into the series, in Order of the Phoenix, we see what happens when Dumbledore’s tremendous abilities collide with Voldemort’s formidable power in their epic Ministry of Magic duel.

The series is a remarkable example of how antitheses can be essential to a story, and the respective backstories, unique abilities, and of course choices of Voldemort and Dumbledore prove it.

How to use antithesis

With all the ways you can implement and define antithesis, it’s good to have a number of tricks or rules of thumb to keep in your back pocket. Whether you’re writing a short story or your next feature screenplay, here are some things you can keep in mind.

If you’re using antithesis in the form of a rhetorical device, try to keep the number of antitheses to a minimum unless it’s a crucial character trait of the speaker. Using a similar literary device too often can leave your writing predictable or even annoying. The more you use a tool, like antithetical language, the less meaning it can have.

Keep the structure of your antithesis as similar as possible if you want to highlight the differences more intensely. And try to keep the phrasing itself balanced. Both variables of the equation don’t have to be exact, but the lyrical phrasing can help your antithesis shine and stick long after the read.

Antitheses via characters and sentence structure can assist in not just interesting writing, but memorable writing. They can make your message more understandable and retainable, which should be a top goal in any written work. You never want to give you reader a reason to stop reading.

Antithesis vs. irony vs. juxtaposition

Oftentimes, antithesis is mistaken as irony when used in speech. Although both are used to convey contrasts of ideas, they have a distinction: antithesis is structured with parallelism in mind, whereas irony implies contradictions between appearance and reality through tone or choice of words. See examples below:

Juxtaposition, on the other hand, is used to also highlight the differences between two things, but those two things do not necessarily have to be totally opposites. This rhetorical device compares similar things so that the audience will spot the subtle differences. Juxtaposition also does not require sentence parallelism or balanced grammatical structure. One popular example of this literary device is the expression “When it rains, it pours,” which means when one thing goes right, many things will go right; also, when one thing goes wrong, everything goes wrong.

Literally meaning “opposite,” antithesis is commonly used among writers as it adds color and flavor to their works. This literary tool can be used to show the character’s mindset and personality as well as set up an argument. Here are some of literary works where the use antithesis stands out: